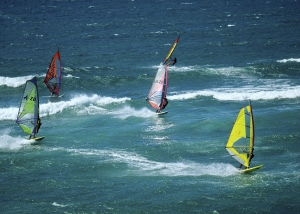 This is one of the best windsurfing spots in the world. The winter offers bigger swells and is the spot to watch the world’s best soar off waves and flip around effortlessly. 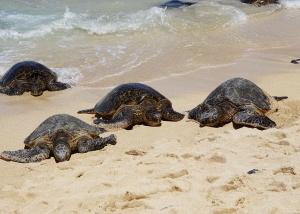 Green Sea Turtles are found throughout the world, primarily in tropical, and to a lesser extent, subtropical waters. The Hawaiian green turtle is genetically distinct from the other green sea turtle populations, nesting primarily in the French Frigate Shoals of the Northwestern Hawaiian Islands and feeding in the coastal areas of the main Hawaiian Islands.

This species was in a steep decline as of the 1970s because of direct harvest of both turtles and eggs by humans. The population has grown steadily over the last thirty years after protection began in 1978. Greens are the most common species of sea turtle found in Hawaiian waters. 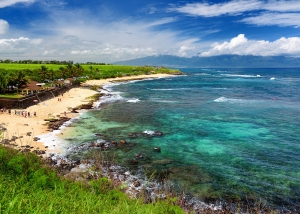 Ho’okipa Beach Park is one of the top spots for ocean sports and recreation in Maui. Located at Mile #9 on Hana Highway, this breath-taking white sand beach boasts some of the best waves on the Maui coastline. A mecca for surfers of all ages since the 1930’s and the “home of contemporary surfing,” Hookipa Beach is among Maui’s most popular sites for events large and small. The Aloha Classic and Red Bull surfing competitions have come to Ho’okipa and the Maui Sports Foundation sponsors a number of events each year.